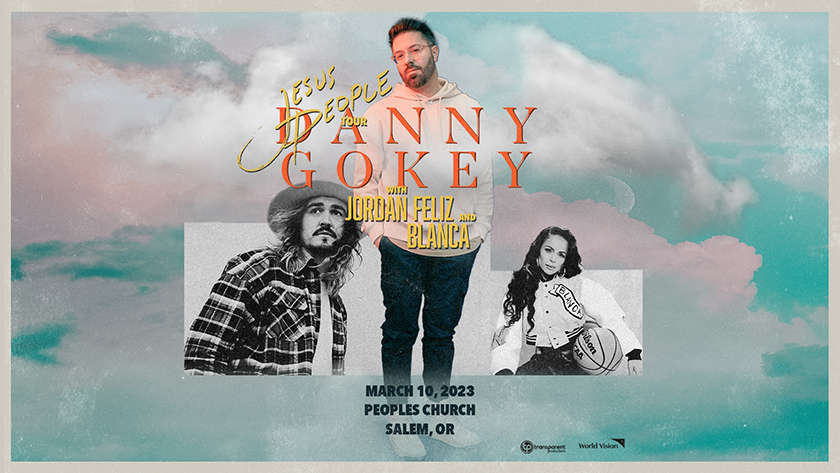 Hope 107.9 welcomes Danny Gokey, Jordan Feliz & Blanca back to Oregon for a night of music and fun!

More Information (Hope 107.9 is not responsible for external websites)

CLICK HERE TO BUY TICKETS TO THIS CONCERT EVENT!

Are you ready for a night of refreshment, encouragement & fun all wrapped up into one? Then the Jesus People Tour is just for you! THIS Spring, Danny Gokey and his friends Jordan Feliz ("Jesus Is Coming Back") and Blanca ("The Healing") will be hitting 25+ cities nationwide, and we can’t wait! You'll sing, dance, worship and leave with a renewed challenge to be Jesus People to the world around you! The Jesus People Tour will feature many of Danny’s popular songs, including Tell Your Heart to Beat Again, Haven’t Seen It Yet, and Love God Love People, so don't miss it!

Danny Gokey is thrilled to be bringing the Jesus People Tour to your city! Grammy-nominated artist Danny Gokey became a favorite of millions of fans as a Top 3 finalist on Season 8 of “American Idol.” Following Idol, Gokey released his first album, My Best Days, which debuted at #4 on the Billboard Top 200 album chart. Since that time, Gokey has celebrated a series of #1s including his follow-up album releases Hope In Front of Me and Rise, and his first Award-winning holiday album, Christmas Is Here. Spawning singles like “Hope In Front of Me,” “Rise,” "Masterpiece", “The Comeback,” and RIAA Gold-certified singles “Tell Your Heart to Beat Again” and “Haven’t Seen It Yet,” Danny has cemented his place on the radio charts with multi-week, multi-chart #1 runs both in the US and Canada, and now Latin markets with Spanish singles and collaborations like those on his latest release Jesus People. He is the founder of the non-profit organization, Better Than I Found It, which partners with organizations already making a difference in their communities to help them multiply their impact and affect even greater change. He and his wife Leyiet also launched Livin’ la Vida Gokey, a podcast featuring conversations about faith and family. Gokey is a native of Milwaukee and currently lives outside Nashville, TN with Leyicet and their four children.

Centricity Music recording artist Jordan Feliz quickly became a household name when his first radio single “The River”—the title track from his critically-acclaimed debut—became a smash hit. Spending an unprecedented 12 weeks at No. 1, the chart-topping single was named ASCAP’s “Christian Music Song of the Year” and garnered Feliz his first RIAA Gold® certification. Thanks to his charismatic vocals and signature blend of soulful pop, each of his seven subsequent radio singles has landed in the Top 10 with “Witness,” “Glorify” and“Jesus Is Coming Back” notching three more No. 1’s for the singer. In addition, the California-native has been nominated for five Dove Awards, taking home the trophy for 2016’s “New Artist of the Year.” He has toured with some of the biggest names in Christian music, including TobyMac, Michael W. Smith, for KING & COUNTRY, Matthew West and Crowder. Co-produced by Jordan Mohilowski and Feliz’s longtime collaborator Colby Wedgeworth, his newest album Say It combines pop, gospel and soul along with some of Feliz’s most transparent and personal lyrics to date.

The powerful pop vocalist of Puerto Rican descent, Blanca, was born in New York City and at a young age, moved to Florida, where she lives today. The Premios Arpa award recipient’s self-titled, debut solo album, following a successful Dove Award-winning run with Group 1 Crew, garnered two No. 1 radio singles, “Who I Am” and “Not Backing Down (feat. Tedashii),” the latter of which was featured on ESPN. Shattered, Blanca’s second album and a project that is very personal to her, added three back-to-back No. 1 radio singles (“Real Love,” “What If” and “Remind Me”) to her story, along with 104 million streams and more than 39 million views on YouTube. She received her first-ever Tecla Award nomination in October of 2019, in the category of Best Musician Creating Social Content. Blanca’s recent radio single, “Even At My Worst,” became her sixth No. 1 radio single. Also, “The Healing (feat. Dante Bowe)” was a resounding success that allowed both of them to perform at the 2022 K-Love Fan Awards, where Blanca was nominated for Female Artist of the Year. Her new solo project, The Heartbreak and The Healing, is available everywhere now.

More details for this venue

The event runs from 7:00pm to 10:00pm on the following dates.
Select a date to add this event to your calendar app.

Hope 107.9 exists to shows God's love to people all over the Willamette Valley.